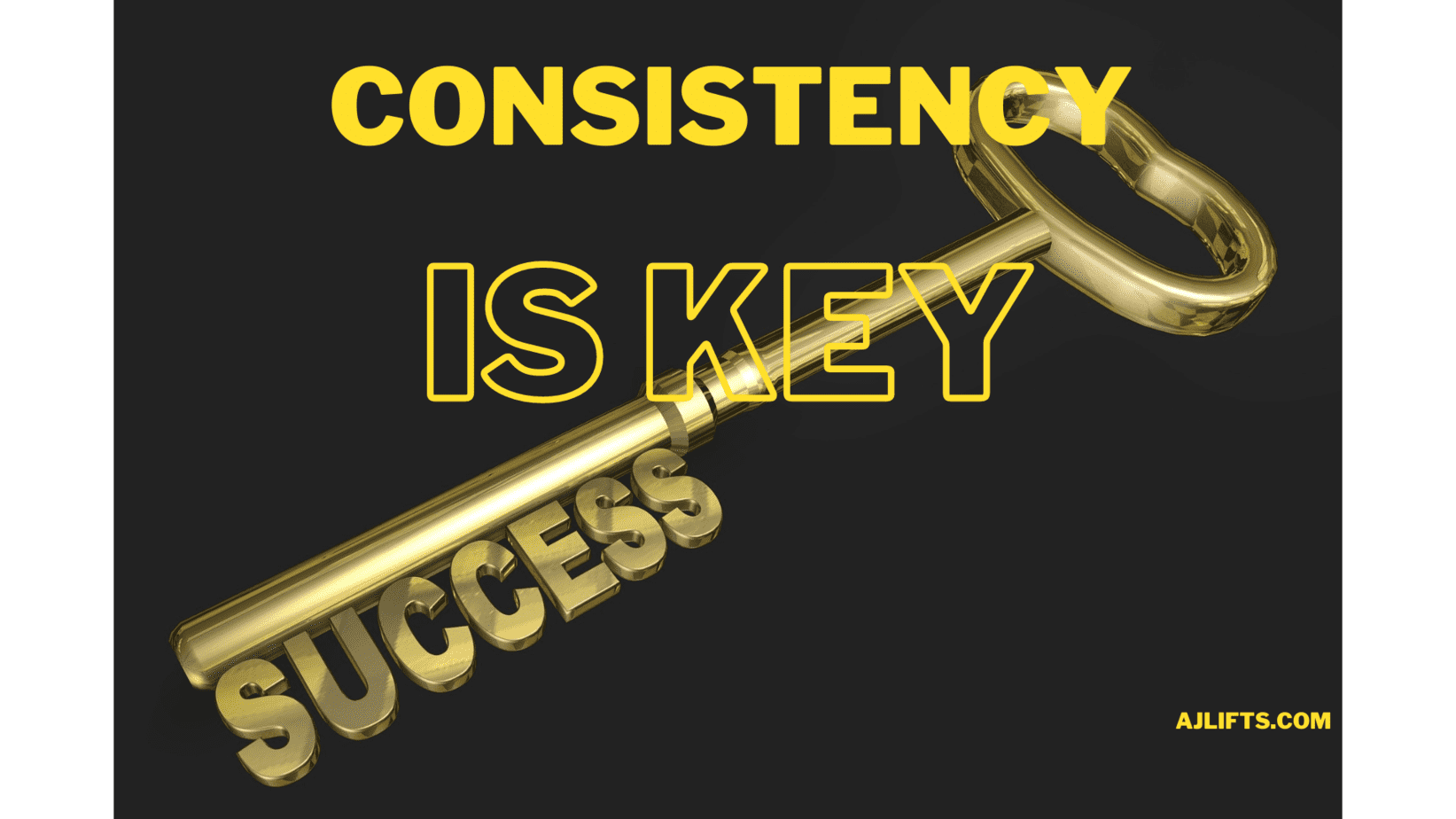 Consistency – noun. conformity in the application of something, typically that which is necessary for the sake of logic, accuracy, or fairness.

Consistency is what separates the losers from winners in life. Ever wonder how a book gets written or a bodybuilder sculpts a physique? Consistency is the key answer you’ve been looking for. The Formula is: Consistency + Time = Miracles

Consistency involves three specific ingredients. Habits, Discipline and Self-Control. Good habits set you up for success and make it easier to win the game.  Bad habits set you up for failure and make you a worse person in the long run. Discipline means doing what you know you should do, when you should, the way you should. Self-Control is the most important factor to success because you can’t master the external until you master the internal (Yourself.)

I said that Consistency is the key. But I didn’t say to what.

So just what is Consistency the key to, anyways?

Consistency Is The Key to Success

If you want any real, lasting success then you’ve got to commit.

Commit to Excellence and watch your life gradually change and improve for the better, day by day, month by month.

Miracles happen when you commit to a course of action and then remain consistent. Consistency is the only way to create a miracle. If you want something bad enough, you will stick to a course of action long enough to make it happen. If you don’t, then you are lying to yourself. Stop wasting your time and move onto something you are serious about making happen. Because of the internet and modern addictions the average human has the attention span of a fruit fly. That means if you can overcome your Internet and Smartphone addiction you will be in the top 5% of human beings. If you use the Internet and your smartphone to produce, then you are winning. Any and all mindless consumption only harms yourself and robs you of your valuable time.

Inconsistent efforts lead to mediocre results. That’s why you need to ignore your friends  and focus on the goal at hand. To attain real results you must put in real effort. Anything else is just kidding yourself and setting yourself up for disappointment down the road. Making miracles happen is a matter of willpower and work ethic. Miracles happen when you decide that you want something bad enough that nothing will stop you from obtaining it. When you pour your heart, soul, blood, tears and sweat into your goal…you can make things you never thought possible happen.

Committing is the easy part. It’s deciding to commit that often takes time. It’s easier to just be mediocre. To just be average or lazy. To be a consumer instead of a producer. At least in the short-term. In the long run, being mediocre is a recipe for dissatisfaction and wondering. “What If?” “What if I had given something 100% of my blood and soul, maybe I could have been a somebody instead of a nobody. Maybe I could have been a competitor instead of a spectator.  Those thoughts of what might have been will keep you up all night in your middle age. Its much easier to take big risks in your youth and still recover. Its much harder to do so when you are a fat, balding 40 year old set in your ways.

Failing to Commit = Stuck In Limbo = A  Commitment to Mediocrity

Its critical to recognize that not committing to a prescribed course of action is a commitment in and of itself. Its a commitment to being a mediocre, Joe Schmoe loser. Its important to put a high value on your time, attention and money.  Sooner or later though, you’ve got to reach the point where you make a decision. You can’t constantly be trying on new hats or scheming up new plans without following the ones you made in the first place. You’ve got to create a self-imposed deadline. “I will decide what to do by such and such time, and I will commit to that decision, no excuses.” I committed to this blog. I opened my site last year, in May 2021. Since that time I have forced myself to post and write even when I don’t feel like it.

Inaction is just as Bad as Wrong Action

Taking no action is just as bad as playing video games, mindless internet/Youtube surfing and other time wasting activities. An object in motion stays in motion. An object at rests remains at rest. If you train yourself to be lazy and unproductive, that will be your default mental state. This will only make it harder for you to break out of the routine and have a productive day. On the other hand, if you train yourself to value your time and energy as precious, limited commodities you will be much more selective.

This selectiveness will help you out because you will value yourself. When you value yourself you refuse to dedicate precious hours of energy to mediocre time wasting activities. When some slacker pothead from the past hits you up and asks you to come smoke a blunt, you’ll tell him “So sorry amigo, I’m busy at the moment. Maybe some other time.” Have you ever noticed that the people with the most mediocre/sad lives tend to be the ones who spend the most time escaping reality?

What do all these people have in common? They are all attempting to escape reality and they all put a low value on their time. They don’t have a minimal level of self respect for themselves. They would rather keep escaping reality through their various vices then face the miserable, boring existence they have created for themselves. You know what I also noticed about most of these people? They are usually out of shape, smell bad, unkempt, dress poorly and are social outcasts. If they have friends they are losers like them.

What they fail to recognize is that they all share the same problem. The problem? They are attempting to escape reality by indulging in escapism. The result? A mediocre life. Only by facing reality and the challenges life presents head on can you become a winner. Only by committing for the long haul to your master plan can you achieve the success you truly desire.Consistency is the key that unlocks all the other doors of success. Without it, you don’t have the slightest chance at ever reaching the success you truly desire.